The XBOX ONE is all about how we watch TV (Updated) 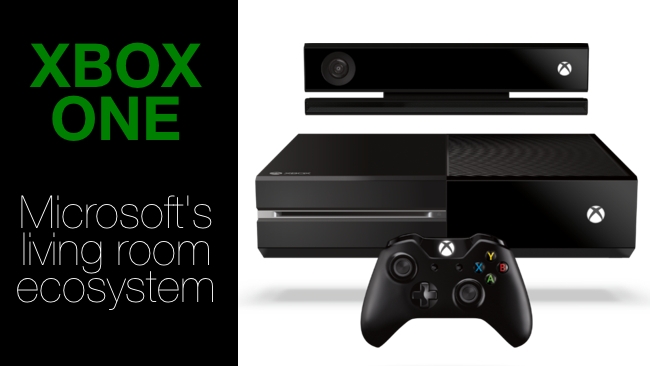 Microsoft has revealed its new XBOX system, called XBOX ONE. It's as important as a living room media hub as it is for playing games. And as such, this might be how we all consume content in the very near future. K. Stewart reports

Xbox One is a system designed to harmonise and unify the living room experience. An all-in-one system drawing together movies, TV, music, internet, Skype video chat and gaming with voice and gesture control driving truly lightning fast transitions - from movie playback to TV to internet in an eye-blink. After two previous consoles which went all-out to establish Microsoft as the home for hard core gamers, the console of choice for the ultimate in online fragging, this third iteration circled back to the multimedia console everyone expected of Microsoft before Halo.

Microsoft clearly feels confident enough of its gaming credentials 13 years after Xbox 1 to spend the first 15 minutes of a short, tightly choreographed reveal demonstrating not games but instead a seamless blending together of your home entertainment channels. Turn it on by simply saying 'xbox on', swipe through entertainment channels with a wave of your hands, 'grab' a screen to return home. 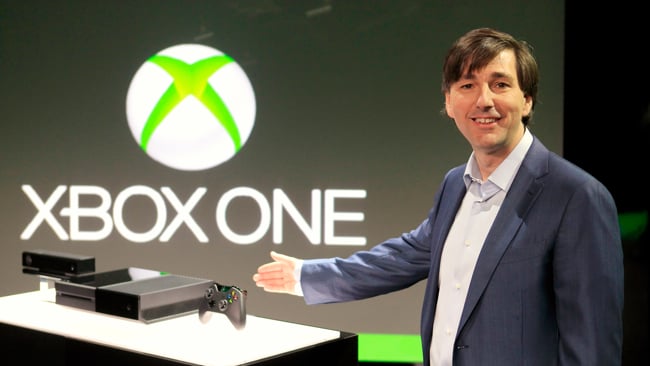 While Sony talked about, but dropped a HDMI input for PS3, Xbox One will definitely ship with this port (in the US) as it's intrinsic to the Xbox One concept of simplifying your living room experience with its new, upgraded, all-seeing Kinect motion detection eye. In their long march from the desktop to the living room, here was Microsoft's vision of the future of (smart) TV.

The new Xbox will simultaneously run three OS; Host OS which boots the machine and launches Shared Partition (for apps like Skype, Netflix etc.) and Exclusive (games). In one demonstration, Don Mattrick showed how Windows 8's snap mode has come to Xbox, so that you might be watching Star Trek (2009) and split the screen to pull through Internet Explorer and browse showing times for its sequel at the cinema while the movie kept playing. This truly has the potential to revolutionise familial remote control battles to new levels of exasperation, but if other family members aren't, actually, watching TV then it looks a fun feature to play with.

In a similar vein, Microsoft has invested in a partnership with the NFL to make watching American football more interactive, with exclusive content designed for the system. Will the Premier League follow? Let's see launch day sales. Another reflection of the home entertainment vision was a unveiled via a video clip with Steven Spielberg announcing a live action Halo TV series. As we didn't get to see anything of this other than a logo, how this will turn out - Terra Nova 2 with Space Marines? - is hard to judge. Netflix made a big impact by spending over a $100 million on its first House of Cards season. Is Microsoft's ambition at that level? Or was the Game Of Thrones reference just for MS chutzpah?

Microsoft was clear this first reveal was primarily about the Xbox One vision, with the second part at E3 devoted to games. Nevertheless, some games somehow snuck on stage with the first of these coming from EA Sports who (coincidentally?) had previously let it be known there were no Wii U games in development, not even FIFA. EA stumbled somewhat during the previous generation transition, so the new Ignite game engine wasn't being undersold in its next generation awesome-ness. Real-life sporting superstars such as Messi appeared in a clip reel talking about sporting intelligence, which EA blithely insisted its new game engine would mimic with near human artificial intelligence.

The game clips which followed looked slick, but given the pre-rendered CGI already blended into EA's games, it was hard to be blown away just by watching more 'uncanny valley' sports footage. There will, of course, be a range of exclusive content from Madden, NBA, UFC, and FIFA 14 for Xbox One.

From Microsoft itself, Forza Motorsport 5 provided an appropriately dazzling showreel of auto-erotica but studio head Phil Spencer sadly declined to challenge PS4's Drive Club over the quality of the interior stitching or the flecks of metallic paint. More impressively, there was a claim of more games than ever before in production at Microsoft Studios with 15 due for the first year and eight of those to be new IP. Left unsaid: how many of those games for hard core gamers, how many for casual gamers?

To close the show, Microsoft turned to Activision and the world first showing of Call of Duty Ghosts. Some of the scenes were quite spectacular, however the plot line of America's much vaunted military once more being decimated, so that your small squad could take the role of underdogs, strained credibility and there was little to suggest a genuinely new gaming experience.

While Sony has so far played coy with its PS4 design, Microsoft opened almost immediately with the Xbox One design and it certainly seems worthy of the company's pride. Xbox One was a rather wonderful X-slashed monstrosity, Xbox 360 famously adopted an inward curved, 'inhale' design - which unfortunately helped turn its insides into a chip melting inferno - while Xbox One is a stern, rectilinear machine that looks like a high-end cable box. A key feature is near-silent operation and for those not left entirely deaf by the 360's fans, this is great news.

Let's be honest, Microsoft is on a bit of a design roll with its fresh Windows 8 UI, the well engineered Surface RT and Xbox One fits right in. What isn't quite so clear is what's inside the box. While Sony's PS4 reveal took pains to get into the performance advantage of its 8Gb of high speed GDDR5 RAM, Microsoft simply mentioned 5 billion transistors, 8Gb of RAM and moved swiftly on. Both machines have an 8-core AMD Jaguar-derived CPU with integrated Radeon graphics card technology. Dev talk has fairly consistently talked to PS4 having a performance edge, but how much difference this will really make is unclear - PS3 and Xbox 360 were radically different hardware designs that developers still somehow made to run the same games at broadly similar quality.

Xbox One will ship with a 500Gb hard drive and, as long rumoured, will require mandatory installs and has a system which 'supports' reselling and trading of games but may require a fee. The lucrative second hand market has long been a pain point for publishers and Microsoft is striving to find a balance between customers desire for cheap games and publishers irritated at not getting a cut of resales. Exactly how this system will work remains to be seen, but is bound to be contentious.

Backwards compatibility with 360 games isn't supported either and there's no option to provide access to these games via a streaming service, as planned by Sony for PS3 games. The Xbox One will have a Blu-ray drive, USB 3.0, and Wi-fi built-in - at last! There is no news yet as to pricing, but a worldwide global launch later this year is promised.

As to 4K… when introducing the 360 to developers, Microsoft gave every attendee a Samsung HDTV to emphasise it being the first HD console. This obviously didn't happen this time for 4K and it looks increasingly like 4K can't be an integral part of this console generation. The target for games will be full 1080P at 60fps, a significant step up from the 720P at 30fps which is typical of this generation, but obviously not 4K. Video playback for 4K should be possible (with 24p only suppored by HDMI 1.4), but as the big news in the Blu-ray camp is 'mastered in 4K', rather than delivered in 4K, there seems little to no chance of any next gen console shipping with a 4K drive. Further down the line, there may be additions or iterations that do support 4K to some degree - as with the HD-DVD add-on drives for the 360 - but no-one is keen to follow Sony's example on PS3 where the high cost and limited availability of key Blu-ray components took a sledgehammer to pricing and profitability.

As to 4K… when introducing the 360 to developers, Microsoft gave every attendee a Samsung HDTV to emphasise it being the first HD console. This obviously didn't happen this time for 4K and it looks increasingly like 4K can't be an integral part of this console generation, at least for gaming. The target for games will be full 1080P at 60fps, a significant step up from the 720P at 30fps which is typical of this generation, but obviously not 4K. Video playback for 4K should be possible (with 24p only supported by HDMI 1.4), but as the big news in the Blu-ray camp is 'mastered in 4K', rather than delivered in 4K, there seems little to no chance of any next gen console shipping with a true 4K drive. In press briefings following the May 21 event, a little more information has been revealed by Microsoft. Xbox blogger Major Nelson 'AKA Larry Hryb' confirmed Xbox One 'supports BOTH 3D and 4K' in a live Yahoo chat while Microsoft's CVP of Marketing and Strategy, Yusuf Mehdi indicated, "There's no hardware restriction there at all," regarding 4K gaming. The latter is a slightly different emphasis from Sony, whose president of worldwide studios Shuhei Yoshida, clarified "PS4 supports 4K output, but does so for personal content like photos and videos, not games. PS4 games do not work in 4K." Given the similar horsepower of both machines, the distinction seems largely theoretical / marketing related. The possibility of 4K gaming is a long way from the reality of it.

A more likely application is 4K streaming video and the degree to which these machines can replicate Sony's $700 FMP-X1 4K Media Server remains to be seen. Xbox One will come with an integral, non-replaceable 500Gb drive - so there's certainly not much space to download 4K content, but USB 3 means adding terabyte storage shouldn't be an issue. The US Autumn launch of Sony's 4K media service will likely be the point at which we properly realise the potential of the games consoles as 4K media players when Sony defines its 4K message and Microsoft responds.