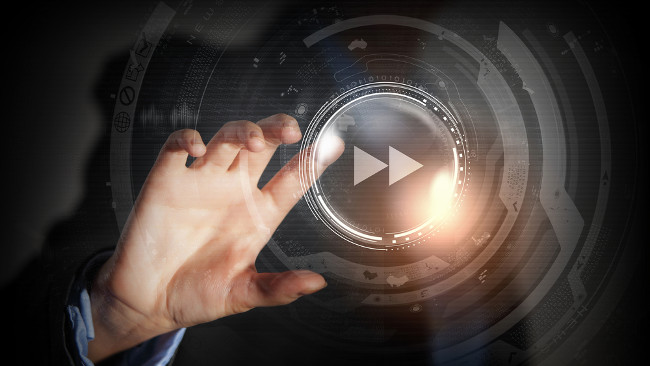 Replay: Although it can be fun to ponder the future, reading the tea leaves for the video tech industry may, ultimately, be a fruitless task. Note that this article was written when 4K was still very rare, but the points still stand.

There was an old Benny Hill sketch where a guest says to the interviewer, "Yes, I can."

This is followed by the interviewer asking, "Can you predict the future?"

In the world of video technology, the appropriate answer is probably "no, we can't." In a lively discussion on these pages recently about the future of 8K in the home, the vote seemed to be split between those who thought the coming of vast screens was inevitable and those who thought it was both unlikely and technologically unnecessary.

History is littered with famous erroneous prophecies. In 1943, the President of IBM was quoted as saying "I think there is a world market for maybe five computers."

Three years later Darryl Zanuck at 20th Century Fox, claimed "television won't be able to hold on to any market it captures after the first six months. People will soon get tired of staring at a plywood box every night."

As recently as 1977, the founder of DEC stated "There is no reason anyone would want a computer in their home." And Microsoft did not really grasp the significance of the internet until 1995.

Although science fiction writers throughout the 20th century predicted telephones would have pictures, the many attempts to introduce videophones over the decades failed miserably. It was only when Skype arrived that the prophecies were fulfilled, but still by far the majority of telephonic conversations are audio only. Arguably, a far more important development (and one that initially took the telecoms industry by surprise) was the adoption and spread of texting. But that shock was nothing compared to the seismic shift to the music industry caused by downloads and streaming; not only was it unforeseen, but when the technological revolution was finally recognised, it was seen as a threat rather than an opportunity.

Science writers since the beginning of the 20th century predicted all movies of the future would be in colour and 3D. I've argued here before that 3D failed in television not just because of cumbersome nature of the technology and the familiar dilemma of the audience waiting for a product while the producers waited for an audience, but because 3D vision is a capability that we all have but which, most of the time, lies dormant. Put a patch over an eye and the world does not become dramatically less real, but if you play tennis or go hunting, you will be at a significant disadvantage. In gaming, 3D can be a real asset; in cinema, however, the audience seems to have a 'take-it-or-leave-it' attitude.

It's not the technology that leads

Why does your phone have a 4K screen, but your local cinema only 2K? In technological terms, this is absurd, but in financial terms, it makes perfect sense. The majority of cinemas remain 2K because the cost to re-equip cinemas to 4K is substantial and could not be easily recouped at the box office. Consumers, on the other hand, if faced with the choice of buying a 4K TV or camera rather than a 2K one, will go for the former. For manufacturers, it is economically imperative that they offer 4K products.

It is important that consumer desire to get the best specified kit they can afford (why buy a HD TV when a UHD TV is on offer?) should not be mistaken for a huge demand for ever-higher picture quality (look how DVDs continue to outsell Blu-rays).

Consumers want 4K TVs, but will they continue pay a premium for a 4K streaming service? Will the extra cost of post-producing in 4K be offset by higher sales? Central to those questions is another question: will streaming services race ahead of conventional broadcast? (I think the answer to all those questions is a qualified 'yes', but there are still a lot of unknowns in the equation).

It's not technological innovation itself that drives change, it is how those developments fit in the patterns of our lives and, crucially, the economic possibilities created.

And just what is TV?

One thing that does seem sure is that screens in the home will get bigger by the year, even if screens in theatres get smaller, but let's be careful about extrapolating from the past. Our homes are actually getting smaller, particularly in cities like London where space is at a premium. Before we go too far in predicting what the TV screen of the future will be, perhaps we should take one step back and ask just what television itself will be in the future.

The traditional 20th century image of TV watched by a family sitting around the set in a semicircle is obsolete; TV is increasingly watched individually on a number of smaller screens. Young people now seem to have little concept of TV in the traditional sense; what they watch, they watch on the screens of their laptops, tablets and phones. Maybe distinct markets will develop for luxury big screen viewing and more immediate small-scale viewing. Maybe immersive head-mounted displays will be with us before wall-sized screens.

And what will we watch on the screens? Since home video arrived in the 1980s, the cinema feature film, a form that has been established for the best part of a century, dominated. Although some thought that home video would be the death knell of cinema, it actually revived interest in the movie. Then, over the last decade, something else has happened. We now watch programmes when we want to, not when scheduled, and the 'box set' has taken over from the movie as the preferred serious form. Was this predicted a couple of decades before? Not to my knowledge – it sort of crept up on us. The 8, 12 or 13 part drama series not only gives filmmakers great scope for giving much greater depth to themes and characters, but for the TV channels, it's an unrivalled way to get the audience hooked. This is a golden era for cable and on-demand TV, but the market is fiercely competitive and there is always the threat that unauthorised BitTorrent downloads could undermine the economics just as the music industry was devastated by free downloading.

Will VR coincide with the convergence of gaming and TV or will they remain separate media? I have written before on what I believe is the fundamental difference between how narrative functions in games and cinema, but many disagree with me.

Where does this leave us? As the old saying goes, the only thing we learn from history is that we learn nothing from history and I'm not going to make any predictions. All I would say is that just because we can have 8K screens does not mean we will. And that many forms of media have very short lives, while others live well past their predicted sell-by dates.

As I sit writing these words, three streams of media are impinging on me – one from inside my house, two from outside and they are in a form established many decades ago and which, in technological terms, could be considered obsolete, but which continues to flourish: radio. And mono radio at that.