Here's why you sometimes need noise 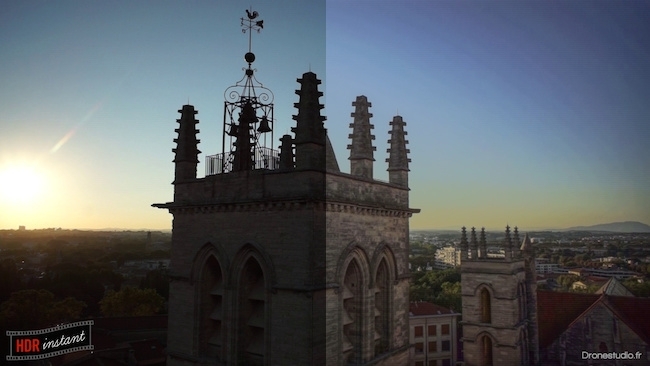 Noise isn't always the worst thing. Sometimes it can improve your images.

Have a look at the picture above. It's in two halves. The left half is noisy, but there's very little banding in the blue sky. The right half has less noise, but is heavily banded. Which do you prefer? Some people would prefer the noisy one.

We should say here that this picture was taken for a very different reason - to illustrate some very clever software that takes consecutive video frames and superimposes them to give you a higher dynamic range still frame. That's what happened here. The product is called HDRinstant and you can read about it here.

It does seem to work and you might want to give it a try. But while the picture on the right might have more detail in it as a result of the HDR process, it has less noise as well.

And that means that whereas on the left side, there's no visible banding - but some visible noise - on the left side, there's quite visible banding and very little noise. And it's the lack of noise that causes the problem, because the noise puts enough "randomness" in the picture to smudge the boundaries of the contour lines of the blue sky. They're still there but they're a much more complicated shape because of the noise.

This is just a quick, opportunistic note to point this out as a result of seeing this picture. You don't normally get to see this type of comparison in such stark terms.

But remember: before you write off any of your equipment because it's "only" 8 bit - if you add a bit of noise (or maybe you've got just enough coming off the sensor) then it can look as smooth as 10 bit, if you can only live with the extra graininess.