Replay: Is DJI's OSMO the best solution for documentary shooting in remote locations? Craig Marshall reflects on his experiences during a shoot in Asia.

It's unconventional, but sometimes it's the best tool for the job - a rigged up DJI Osmo

I'm normally lugging heavy ENG style cameras around Asia but in preparation for an anticipated travel documentary, I seized an opportunity to acquire a used DJI 'Osmo' 4K gimbal fitted with the entry level Zenmuse X3, a 4K capable camera usually attached to DJI's Inspire series drones. My other cameras are HD and weigh in at around 25Kg kitted up, so I jumped at the chance of shooting 4K video on a such a lightweight device, which seemed ideal for the remote month long shoot in Asia we were planning.

As a retired Broadcast Television ENG/EFP DoP, I have written some negative words about capturing any sort of professional video on such a small sensor using very limited bitrate codecs. So as soon as the Osmo arrived, I ran several workflow tests well in advance of our shoot, which to be fair would be more about capturing important events rather than trying to replicate IMAX cinema quality.

My personal 4K edit suite is based around a heavily optioned DaVinci Resolve PC with a 12G Decklink SDI Pro 4K card installed and routed to both a 55" Sony X9000 series 4K TV plus a properly calibrated 24" Rec.709, 10bit SDI 'grading' monitor. It is a clean signal path and quick to identify weaknesses in camera or codec.

There are two things you really need to know about shooting video on the DJI Osmo:

1) 4K video drains the battery at a truly alarming rate
2) Did I mention the staggering speed of battery discharge?

At about 30 minutes capacity each, my three DJI batteries are nowhere near enough for a day's video shooting. However there are at least two very elegant solutions available:

1) Buy a cheap aftermarket USB charger that takes two DJI batteries. With three batteries as a minimum, you can have one in the camera whilst two are charging from the power bank in your pocket or your backpack.
2) DJI now supply a low cost 'Battery Extender' for the Osmo, which comes with a replacement cover so the included 600mm cable can connect to their proprietary chargers. 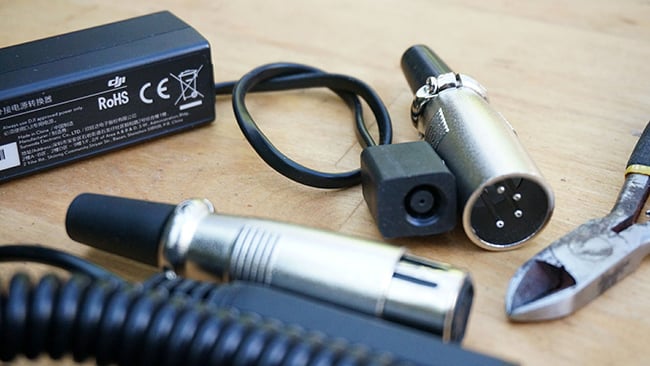 Unfortunately, neither of these accessories had arrived prior to my departure for Japan so I had to make do with the standard Osmo 110/240V AC single battery charger plugged into any mains outlet I could find along the way.

The Osmo is only officially compatible with the X3 and X5 cameras. However, after testing out an X5 Osmo, my opinion is that the size and weight defeats the purpose of the original Osmo concept. The X5 lenses are not so wide either when compared with the X3's 20mm equivalent.

I'm a big fan of large sensors but I'm also a big fan of a 90 degree FOV wide angle lens too, so I'll stick my head out here and say that the original Carl Zeiss Distagon 21mm f/2.8 is one of the very best super wide angle lenses ever made. It offers a 90 degree field of view - much the same as your eye sees but without any of the 'fisheye' aberrations that blight the pictures from most action cameras. It was this feature that drew me to the X3 Osmo - a lens with an almost identical 'look' to the Zeiss Distagon 21mm but permanently attached to a cheap, unobtrusive and gimballed camera the size of a golf ball! 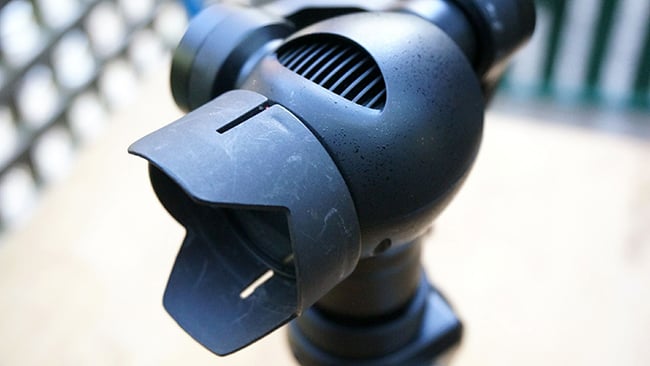 The DJI Osmo has no viewfinder, so you’ll need to fit a smart phone to the fold-up/flip-out phone holder. Unlike some models with flip out legs, the DJI device requires a bespoke Osmo holder otherwise it falls over when you put it down. But with a 1/4" thread, at least you can attach your favourite tripod or any QR mount.

I have yet to catch the smart phone disease so I needed some assistance when it came to set up and monitoring. Fortunately, my producer rummaged through a drawer full of her 'so last year' phones until she located one with an Android 4 (or later) operating system. Although much of what you'll read on-line suggests the Osmo only works properly with an iOS device, this is yet another example of Fake News.

Once set up, the phone displays all the tools you need to work the camera and the gimbal. DJI include a small real time battery charge indicator, and just like the petrol gauge in a Jensen Interceptor, you can actually watch it heading south in real time! There is a user positionable histogram as well as the all important audio level display.

The Osmo handle is fitted with a small thumb pad which acts like a 'joy stick' to manually drive the camera head. For me, this all important control was simply alien to my thumb. That was until I located the gimbal calibration menu where I could set up the control.

Once re-configured, I quickly adapted to driving the camera head. The feel and position of the different buttons becomes rapidly familiar, but please use the Osmo's wrist strap, because if like me you tend to hold the camera out the window of moving vehicles at high speed, the safety strap will help avoid any tears. 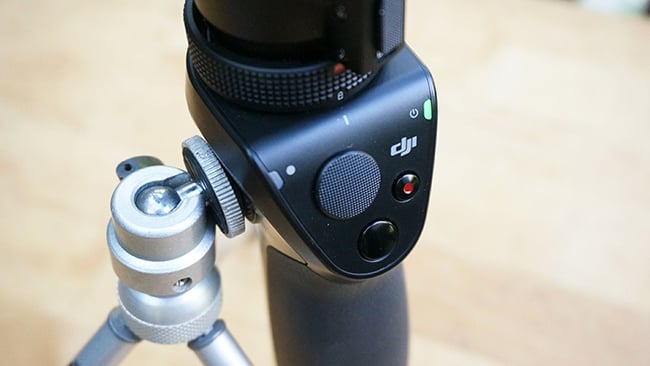 Most smart phones screens appear fairly useless in the typically bright Australian outdoors, so I purchased a cheap, fold-up magnetic sunshade to offer acceptable pictures in bright conditions. These sunshades are so affordable I suggest you buy two or three because you're going to need to cut one up to fit a micro USB style phone charging cable to your phone. When used outdoors with wifi enabled, your phone will use lot of juice so get a bunch of Velcro tabs and place them at convenient locations all over your Osmo hardware. This way, you can quickly attach portable USB power banks to revive your phone, power your lighting and possibly even the Osmo itself. Tip: get a charge cable with a right angled connector!

The control handle is fitted with a single channel miniature microphone that makes an excellent job of recording the whine from the camera's cooling fan and the rumble of the servo motors in action. So invest in an aftermarket super cardioid or shotgun microphone.

Being somewhat of an audio pedantic I bought a Rode VideoMicro. This sensitive, directional condenser microphone is of 'super cardioid' design and is powered directly via the auxiliary 3.5mm input. It's worth noting here that for those crews with a sound person, the VideoMicro can also be pole mounted and 48 volt phantom powered too.

This combination does make for a very unwieldy and unbalanced affair. I located an alloy bracket set from an on-line supplier, which included a versatile 'cheese plate' drilled and threaded for all the usual camera attachments. Now my VideoMicro sits to one side of the centre line whilst the phone 'monitor' offsets the microphone's weight on the other side. The whole rig can still be held, nicely balanced even at arm's length and for extended periods. 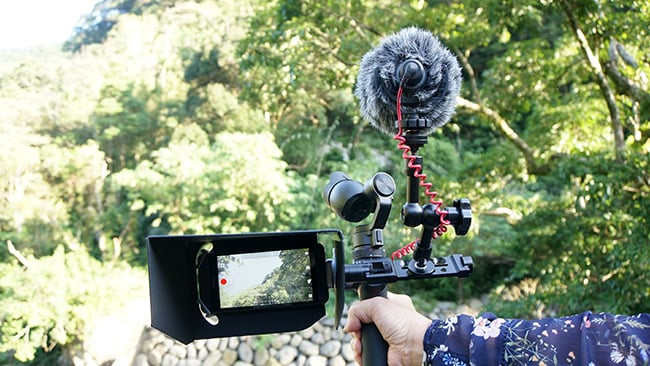 The biggest objection to all DJI's drone cameras from professional colorists is blown highlights. To shoot in daylight at 'cinematic' frame rates of 24/25P and with 180 degree shutter speed you'll need some ND filters. I use an ND16 almost exclusively outdoors with my shutter locked at 1/50th of a second at a frame rate of 25fps. As the X3 lens has fixed focus and no iris to worry about, I generally set the gain (or ISO in this case) to auto. This configuration gives excellent results.
My second most useful optical filter is a Graduated ND with 360 degrees of rotational adjustment. I use both filters with an after market, wide angle lens hood which I advise is an absolutely essential $2 piece of kit, if only to protect and keep rain drops off your lens.

Are the pictures any good? In my opinion, they are better than they deserve to be. My reference point is a properly calibrated 10bit, Rec.709 SDI monitor and trust me, I see a lot of substandard work come into our grading suite, so given the X3's relatively low bitrate, my 4K video recordings are acceptable when correctly exposed and not too stressed.

I needed just one fast U3 64GB Micro SD card on this shoot as each evening I copied the day's camera files into usefully titled folders on two separate drives, and recycled the camera card ready for the next day's shoot.

DJI offers a 'log' option recording mode on the X3, but I would really only consider it to be a low contrast/low saturation setting rather than a true Log image. Given the compressed nature of the X3's codec, it needs all the help it can get, so limiting the amount of colour data might just be a good thing. But I absolutely rejected out of hand every commercial 'LUT' I came across for DJI cameras because none appeared accurate in their colour rendition and several of them introduced a considerable amount of banding.

Consequently, I graded my X3 test chart videos in Resolve, then exported my custom settings as a simple .cube LUT file and brought it with me on the shoot so if I wanted to perform a simple, full colour check in the field, I simply transcode them to a 720P MP4 with the LUT embedded and I can play them out on my portable Notebook PC.

My studio production workflow includes placing all the original files into a professional transcoder, deleting any obvious rubbish, then rendering out the chronological result to two identical set of files on my RAID drive, ready for editing: One will be an 8 bit DNxHD Proxy file with PCM audio conversion, sequential timecode and specific, embedded reel names for each day's shoot plus my basic embedded LUT to assist with editing. Once the proxy conversion is underway, I'll set the up a second simultaneous transcode to 10bit 4K Log DNxHR files in preparation for a final Grade in DaVinci.

Once the Edit is complete, I only need to export an EDL which will be conformed in DaVinci to the high quality 10bit 4K log DNxHR files ready for our master export as a DPX image sequence file.

How does the Osmo work in a documentary scenario? Given the X3 Osmo’s limitations I recommend you work to the camera's strengths. For me, this camera's ability to be mounted on the roof or window of a car, on the outside of a moving train or on a stationary rock in the middle of a stream yet still able to be remotely controlled from a monitor screen up to 100' away gives the Osmo some serious credibility and in the hands of a skilled operator.

Fixed focus and iris on a wide angle lens in a documentary scenario is actually a boon as the operator need only concentrate on exposure and framing.

Being able to safely operate the Osmo's pan and tilt camera inside a hot and noisy locomotive cab in 4K resolution, whilst simultaneously recording excellent sound quality, all from the comfort and safety of the first class passenger lounge is a treat indeed!