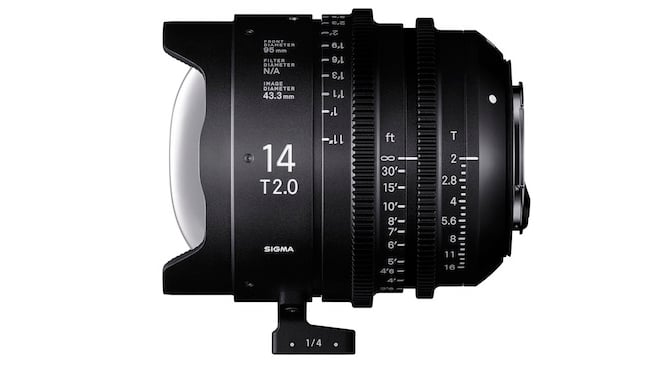 The Sigma ART series lenses have become very popular and respected by those looking for bargain stills lenses they can use in video applications. They are very sharp modern looking lenses, so they don’t have a quirky vintage look. The sharp modern look might make them the perfect kind of lens for shooting a modern high-resolution sci-fi movie, perhaps. I look forward to seeing that. They are especially popular with people looking to get the most out of 6k cameras as they are capable of resolving that kind of detail. In fact, Sigma claims the optical performance is 8K-ready.

For quite a while now there has been excitement around rumours that Sigma will produce cine lenses based on the ART series. Well, now these lenses are really coming and Sigma has just announced two new primes to become available in cine versions to take the full set of Sigma cine primes to seven.

The two new lenses are a 14mm T2 lens and a 135mm T2 lens. These are slightly slower than the others in the set, which are T1.5, but T2 is still very fast for a 14mm lens. It gets harder to maintain speed as lenses get wider, as they typically need to have additional glass elements. These serve to make up for the need to be closer to the focal plane, but extra glass slows down the light.

For me personally, the 14mm is a much more exciting addition to the set than the 135mm. 135mm is quite telephoto and would often not be included in traditional cinema lens sets, but it has become a more popular focal length these days because of the high availability of this focal length in stills lenses. It’s often really handy to have something a bit wider, though, especially when using smaller sensors or working in physically tight locations!

The lenses all have full-frame coverage and are available in PL, EF, and E mounts.

It remains to be seen if all the lenses will cover 6K Red Dragon Sensors or 8K Helium, as these sensors are slightly larger than full-frame. Obviously, the 14mm is probably going to be the one at most risk of not covering the larger sensors. We will have to wait until someone with Red cameras gets their hands on the lens sets. I expect that won’t be long after release.

Sigma is now offering customers some extra options. You can order the lenses with either metric or imperial markings and you can also choose between standard or full luminous paint (glow in the dark markings for working at night or in dark locations and sets)

There is also the option for Sigma to change the measurements at the factory for a fee, or to swap the lens mount from E to EF or the other way around. The PL mount version has a fixed mount that cannot be swapped over.

With seven lenses, it now looks like it will be a fairly comprehensive lens set. Still no news on the price, however.

The previously announced set of five lenses will start shipping in May 2017, with the 14mm and 135mm to follow in June or July of 2017.