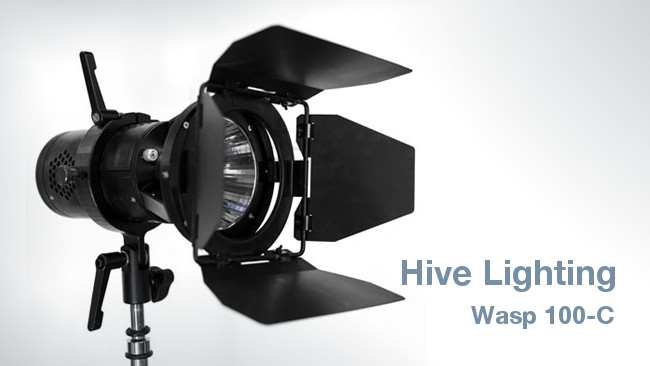 Once again, a Kickstarter darling brings a potentially useful filmmaking innovation to market, this time in the form of a lighting instrument with colour properties that separate it from other hardlight LEDs.

Hive Lighting is already on the map as having done something unusual. A few years ago, the company introduced an entirely new lighting technology to the film and TV market. The hardware underlying Hive's famous light-emitting plasma devices is based on a technology from Luxim, which avoids the need to stick bits of metal through the walls of a lightbulb (often where they fail). This is good, because it improves reliability, although it makes them slightly harder to hot start. The main thing about LEP, though, is that the power supplies are often a bit better made than many HMI ballasts, making them often a bit easier to run, watt-for-watt, on generators. Practicalities matter.

The company's latest project, though, is not an LEP – it's an LED. The Kickstarter project for the Wasp 100-C has been running for a while and, per our policy on crowdfunding, we've avoided covering it until the project had been successfully funded. And boy, has it ever been successfully funded. The project attracted more than ten times its original goal of $35,000, bringing in over $440,000 from 265 backers at the time of writing. Backers willing to stump up a buck less than $800 could receive a Wasp unit for an effective 25% discount off the projected price of $1050. Although the 75 units available at that discounted price are already gone, there is (again, at the time of writing) still an $899 option for people interested in getting hold of a unit at a discounted rate, as well as multi-light options.

Numbers aside, now that it's been funded, we can look at the Wasp 100-C in the same way we'd look at any upcoming product. It seems essentially to be a miniature PAR and that's good. The term isn't widely applied to LEDs, but it's been common in tungsten and HMI lighting for years. The initialism stands for 'parabolic aluminised reflector' and describes the technique of placing the light source at, or at least near, the focus of a mirrored parabola, more-or-less in the reverse of the way a satellite receiving antenna collects a lot of energy and focusses it onto the receiving electronics.

This may seem fairly obvious – put the light bulb in the middle of a shiny, curved object – but as Arri showed with the ArriMAX design, it's possible to put quite a bit of science into it. Whether an LED can strictly be considered a PAR is a matter of some debate, considering the LED emitter only throws light in one direction, but the description of Hive's Wasp light as having a 22-degree reflector, and coming with a selection of lenses for variable beam angle, encourages it to be considered in PAR terms.

LED hardlights in the hundred-watt range are becoming increasingly common, although it was certainly a sparse field for quite some time. The key capability with Hive's product is the colour mixing and there are two principal things to look out for. First is whether the light can produce both pretty colours and an accurate white. Hive specifies the Wasp as 97 TLCI and, hopefully, regular readers will understand why this is a more convincing measure than the CRI numbers quoted by many manufacturers. The CRI R9 red and R12 blues are a little low, as is common with LEDs, but not too much, and hats are off to Hive for using the better system.

The other consideration is about colour matching, especially of the sort of pale, subtle colours motivated by things like moonlight, sunsets and the need to match or simulate sources of deliberately poor colour quality, such as old-style mercury vapour lamps, which have often been embraced in filmmaking for their cyanotic tint. The company is keen to promote its use of five groups of differently-coloured LEDs, which is possibly novel. Either way, if several Wasps can be lined up, fed the same DMX hue and saturation data, and be a precise visual match, Hive will have passed this test.

If this was just another hundred-watt LED hardlight, it wouldn't be that unusual, but the colour mixing is pretty new in a hard source. As ever, we want bigger. 100W isn't that much, even in a high-efficiency technology, and the market will only be mature once devices of ten times the output are affordable. This is a need Hive talked about at IBC, with its 1K plasma lights. That's more an existential concern, though; it's up to Nichia and Cree to solve that, not Hive.

A full review will follow, of course, once we can get our hands on one.