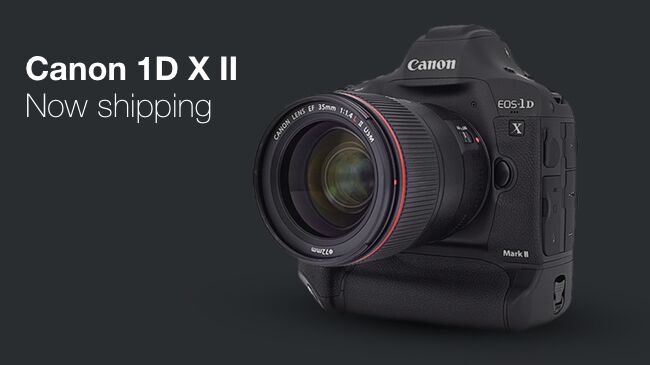 We've just noticed that the Canon EOS-1D X Mark II is now shipping. Say what you might about the rise of mirrorless cameras, but for sheer authority on a photoshoot, you can't beat the form factor of Canon's blockbuster DSLR.

For Canon, single digits in a model name has always meant "top end", and you can't get any higher in Canon's hierarchy than the "1" series. If you've never held one before you'll be surprised and probably shocked by the weight, right up until you realise that it's built to be indestructible. It's weather-sealed and finished off with the sort of toughness that almost gives it an attitude.

The vertical-use second grip at the bottom of the camera rounds off the no-compromise character and is just one of the things that makes you realise that, expensive though it might be, this is a camera that is designed ultimately to make you money.

The new model isn't exactly revolutionary, but that is arguably one of its strengths because - why change a formula that works so well?

The 4K recording format is MJPEG (Motion JPEG), which from a modern perspective seems a bit of a fossil, but the cameras predecessor, the 1D X, proved that this is a good option for still shooters that occasionally need to capture cinema quality images. Not only is the format universally compatible, but it offers up good looking, contrasty, saturated imagines straight out of the camera, with no complex workflow.

We'd expect the still images from this camera to be at the top of what is possible with a full frame sensor.

With a price of around $5,999, this is a sizeable investment for anyone, but probably worth it if you are a still photographer with an occasional need for high quality video. Think of it like this: for under six grand, you get a fantastic, rugged 4K movie camera, with one of the world's best still cameras thrown in for nothing.