RedShark Comments are now turned on 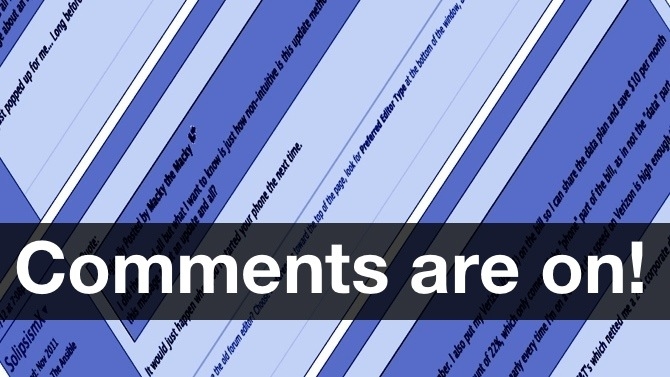 It's taken a few weeks, but now it's ready. We've just turned on RedShark's comments system. Feedback is very important to us and to other readers. It will help us produce more of the content that you want to see.

But that's not the main reason for having comments.

Most of all, we know that readers have a thirst for information and opinion, and commenting on the articles is a great way to get some fascinating discussions going.

You have to register to comment, but we've made it really simple. We won't do anything bad with your information - it's private between you and us, but may be used anonymously for statistical analysis of our readership. What this means is that no-one except us will be able to identify you or anything about you, but selected groups or companies may be able to find out, for example, how many readers we have in a certain country, or other very broad facts about people that look at RedShark.

We do have rules for commenting, but they're based on common sense and curtesy. They're the same rules that we use for the Lightworks Forum. In summary: be polite, don't be negative without giving specific reasons (in other words - don't say "This company is useless because their stuff doesn't work" but do say "This company's wide-angle lens is supposed to work with this camera but doesn't because the lens adaptor is too deep and could damage the sensor"). Overt trolling is not acceptable.

Initially, comments will be fully moderated, which means that your comments will need approval before they appear.  You will notice a slight delay before your comments appear, and, occasionally, this may take a while. When a comment is posted, moderators receive a notification. They then have to "approve" the comment, which they will do in most cases. As soon as they do this, the comment will appear. But because this is a human intervention, it doesn't happen instantly most of the time.

This is a global site so some people may be in a different timezone to the moderators, which may even mean that their comment won't appear for an hour or so. We are trying to appoint moderators in all regions so that delays due to timezones are minimised.

Comments will work on all articles - even old ones. So if there's something you've read and wanted to say something about - now you can! Just search for the article and tell us what you think.

Thanks for reading this, and we look forward to seeing your comments!